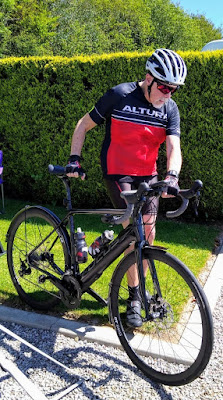 Yes!
Since my last post and after two months of building up to it with the use of my turbo I finally managed to get out on the roads on the new bike.
I have now managed four rides out on the roads but it has not been easy. I have to be on a good day when I am not suffering with too much pain.... and the weather needs to be dry as riding in the rain would not be good with my health condition.
Getting these things to match up is not easy as so often when the weather has been good I have felt so ill that riding a bike would be impossible and then there have been days when it has been pouring down with rain but I have felt able to ride.
I have not ridden far on each ride .. the first time I managed seven miles and my last ride was fifteen miles.
My consultant has been pleased with my response to the chemotherapy and other treatments and currently they have temporarily stopped treatment for the blood and bone cancers and are looking at options for my thyroid cancer which by the way has also spread to my lymph nodes.
The problem is that the surgeon is not satisfied that I would survive surgery due to my hypertrophic cardiomyopathy condition.
If he doesn't operate then the thyroid cancer will kill me sooner rather than later and if he does operate it is likely that I will die on the operating table. That is my current choice.
At the moment I am having more tests to get as much information as possible before I have to make a decision on which way to go.... I will let you know what these additional tests etc come up with in my next post.....
at June 21, 2021 5 comments: