Yes it is true! The RevPro Cycling Team will ride again during 2009.
The plan is to catch the ferry to Cherbourg and then cycle down through France to the Pyrenees. We will then ride over one of the mountain passes crossing the Pyrenees into Spain. We then carry on along the coast to Bilbao or Santander where we will take another ferry to return to the UK at Plymouth. We will then return to Bournemouth along the south coast. In other words one great big circuit involving three countries.
There will be one major change to the team next year. Gareth Morns is getting married next year and with all the planning that entails will not be riding with us on this trip. His place will be taken by Jason Boynton-Lee. All other team members will be the same as during this years LEJOG. The proposed date for this challenge will be during June. It is also possible that the teams name will change for 2009 but I will keep you posted on any developments about this. This trip known as the Atlantic Challenge Ride (ACR for short) will not be done for charity but just for our own enjoyment and amusement.
The team have just six months to train for the ACR and you will be kept up to date on the progess being made.
After we completed the LEJOG a lot of people said to me how much they would love to do a trip like that. Well now could be your chance! We have a space for one more person to join the team for the ACR. Basic requirements are an ability to cycle 100 miles a day over multiple days and a determination not to get off the bike when faced with huge hills. If you feel that you could train to achieve this, then leave a message and I will get back to you and you can come out with us on one of our training rides and see how you do.
at November 25, 2008 No comments: 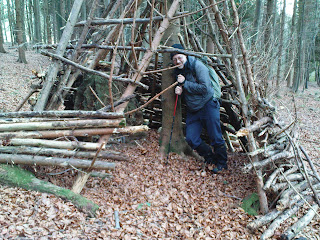 Ray- I mean Peter- looks as if he has been really busy here having built this shelter from wood found scattered around. This shot was taken just before he added a tarpaulin to keep out the weather. A superb demonstration of bushcraft Peter !!!!..........

Even more from the pre Christmas meet 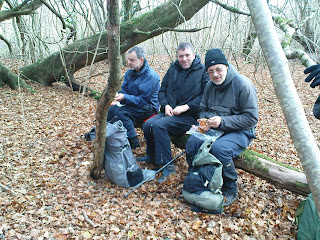 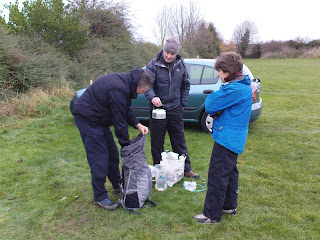 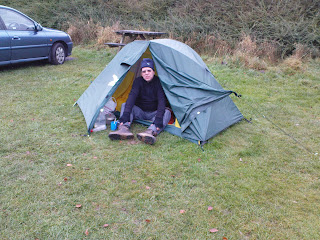 The Saturday night of our pre Christmas static meet was cold. The temperature at one point dropped to zero. In the early hours we had sleet which covered the tents and as dawn approached the temperature started to rise causing the frozen sleet to slide from the tent walls and leave a neat little wall of ice all round the bottom of the tents. The sleet turned to rain and eventualy the rain washed the neat little ice walls away. It continued to rain until about 1030hrs when a blue sky started to appear allowing us to start to break camp. The weekend was enjoyed by all and the walk that John led was a good one which included farm tracks-trails through the woods and a superb ridge section that offered great wide vistas across North Dorset. It is a pity that more members do not bother to attend the late Autumn and Winter meets as they are such a contrast with our last static that was held at Tom's Field. It is obvious that a camp site on a really bright warm and sunny weekend at the end of summer is going to be busy with more people and more tents and more camp traffic all of these things creating more noise and less space. Out of season it is a completly different story and in many cases such as this weekend we are the only campers in the farm field.
I have posted a selection of photos from this weekend. these include shots of some of the happy group in their tents-lunch in the woods-Graham demonstrating how he packs his Jam 2 sac and a shot of Peter doing his Ray Mears impression in his temporary shelter !!
I managed to cycle back without any rain and with bright sunshine although the gusts of wind were a bit scary on the bike.

More from the pre Christmas meet. 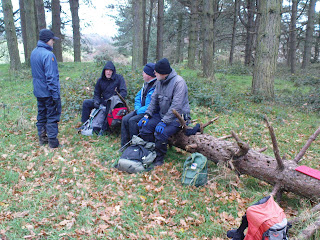 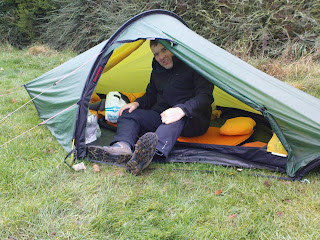 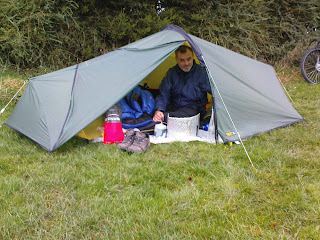 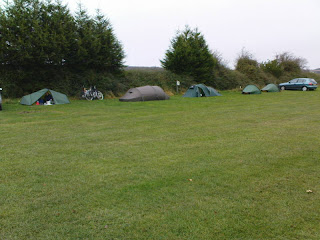 This weekend some of the Dorset Backpackers group have met up for a static weekend. The location is the village of Sixpenny Handley in the north of the county. We arrived on the friday with six tents being set up and occupied by 7 hardy souls. I cycled over here on my revolution tourer and Chris and Mike had cycled here on their giant expedition bikes. The others all arrived by car. We are staying at church farm where there are no screaming kids and plenty of space as we are the only ones here. John arrived fully prepared with a pre planned route for todays walk which was good as those that know me will know that i dont do pre planned. This always slightly worries john hence the prepared route. Everyone enjoyed the walk today and now we are all back in our tents before heading off to the village pub for beer and food. An arctic blast is supposed to be heading our way so maybe we will have a colder night than the mild one we enjoyed last night.
at November 22, 2008 No comments: