The past two days have been spent walking across sections of Dartmoor. No need for a map or GPS as I had Anne with me and as I mentioned in a previous post she knows the moors very well.

The weather could not be described as ideal- wet- windy and misty- but then that is typical of the weather on the moors more often than not. I have really enjoyed this trip to Devon as it is the first time that Anne and I have been able to get away together since I finished the Radiotherapy and it has been another tick in the box on my recovery checklist.
We finished our trip with an ice cream in the rain at Burrator Reservoir before driving back home late this afternoon. All in all a nice little trip.
at October 29, 2010 1 comment:

NICE DAY FOR A WALK.

Yesterday the weather was rubbish for walking. I have never really enjoyed walking in the rain much and yesterday it was 'Devon grade A'rain.- that means very very heavy. I did do some walking but it was certainly too wet to take any photographs- just not enough light.
Now before anyone accuses me of being a 'fair weather' walker I would like to point out that I do walk in the rain including very heavy rain it is just that I am happy to admit that I do not get the same level of enjoyment out of it as I do when the weather is like it was today.

Yes, today was a nice day for a walk.I set off along the Devon lanes with the sun shining and the birds singing and all seemed right with the world. I walked past a number of farms and saw many tractors- now at their place of work and not parked 'on the drive'. I visited a couple of churches in order to take some photographs of which Winkleigh village church was the most interesting.
On the return journey I followed the footpaths rather than the lanes and the sun was still shining when I got back to the village of Bow where we have been staying for a couple of nights.
I think that I managed about ten miles today which is the furthest that I have walked for a good few months. I know that it's not backpacking yet but I do think that I am slowly getting my fitness back - what with the cycling and now a bit of walking I do seem to be making some headway with it all.

Tomorrow we are heading for Annes old stomping ground on the moors above Tavistock for a few days. Anne used to spend hours on the moors taking her dogs for a walk and knows the area better than most so she is a good person to have with you for a walk on Dartmoor - saves having to bother about navigation...!
at October 27, 2010 1 comment:

You know when your in Devon.....because people park their tractors on the front drive. That's what Anne told me when we were driving down here yesterday and it's true...!

Anne was born and bred in Devon- just within the Dartmoor National Park near Tavistock and we have been down here lots of times but it is something that I have not noticed before. Last night I had a good look round some of the local roads and I must have seen at least five tractors parked in the front drive of houses where back at Bournemouth you would expect to see the 'company BMW or Mercedes'.

We are having a few days down here in Devon doing a bit of walking and taking a few photographs. Now that my cycling training seems to be getting back on track I feel that I can take five or six days away from it without any detrimental effect.

Today I spent some time looking around Exeter. It must be nearly ten years since I last spent any time in the City. Like many large towns and cities it seems to have sold out to the commercialism of the retail world. Shops- shops and more shops. Don't get me wrong, there are some nice points of history in and around Exeter but you have to look hard to find them. Some nice old buildings- Cathedral- A city wall dating back to the Romans and a very pleasant area down along the Old Quay- it's just that the visitor comes away feeling that so much more could have been made of it all.
at October 25, 2010 2 comments:

THE LONELINESS OF THE 'INCREASING DISTANCE' CYCLIST.

I have now increased the distance I am riding on my training rides up to 52 miles and I have been managing this 3 days a week. However all of my riding is on my own- all the guys that I would normally ride with for one reason or another are currently out of the cycling loop.

JD is up to his eyes with a bungalow refit in his spare time and won't be able to start training again until mid to late November.
Jason has had various health issues and is unable to get out on his bike and is unsure when his health will allow him to start again.
Gareth has not been out riding with us since he got married and now his wife is expecting a baby in December so he doesn't know when he will be out on the bike again- when the baby arrives his free time will be less than it is now.
Rick is someone else with a young family whose time is restricted and it is nearly two years since he came out on a ride.
And then we have Neil who was planning on doing LEJOG next year. I was told earlier this week that it appears that he has now lost that dream and won't be doing the ride after all. He was originally going to do the LEJOG in 2008 when we all did it but he put it off and now seems to have lost the will to do it altogether. A great pity- I always feel that if you want to attempt a challenge you should just make the plans and do it. If you waste time thinking about it you will always be able to find lots of reasons why you can't do it yet.
Life is too short and it might even be shorter that you think- my illness this year has really focused my thinking on this although that has always been the way I have looked on life. Think of something and just do it and do it as soon as possible...!! If you are reading this Neil make those plans again and do the ride- you will not regret it.

Anyway- to get back to the theme of this post- it has been a bit lonely on my rides recently and even the ferry has had fewer riders on board. This morning I was the only person on board without motorised transport as can be seen in the photograph above- almost eerie.

When I got to my lunch stop at Wool I had a pleasant surprise. The bench that I use at the entrance to the village has had a refit-the wooden slats that were starting to go rotten have been replaced with new ones making my lunch stop even more comfortable. Life gets better and better........
at October 20, 2010 5 comments:

One of my enjoyments in cycling is going uphill -I enjoy the challenge. Better than the climb is the descent.The thrill of going downhill at speed makes all the effort of the uphill struggle worthwhile. After my accident in 2009 I lost some of my confidence on descents although since getting back on the bike recently I seem to be regaining it again .

If you have never been downhill on a bike at speed you must watch 'The Descent of the Col d'Iseran' it is awesome. The descent is frightening-thrilling and dangerous. This you tube film covers the entire 15 minute descent and I suggest you follow the ride all the way to the bottom- it is certainly worthwhile.
The Col d'Iseran is the highest paved mountain pass in the Alps in the department of Savoie in France. It is part of the French Graian Alps near the border with Italy. It stands at an elevation of 2770 meters and the road has a maximum gradient of 12% and it was first used on the Tour de France in 1938. Since then it has featured in the Tour in 1939 / 1949 / 1959 / 1963 / 1992 / 2007  Depending on your fitness it takes 2-3 hours to pedal to the top but just 15 minutes to descend .
'Col d'Iseran' - Put on your helmet and lets go............!!Click on this link
at October 13, 2010 No comments:

RIDING IN THE PURBECKS. 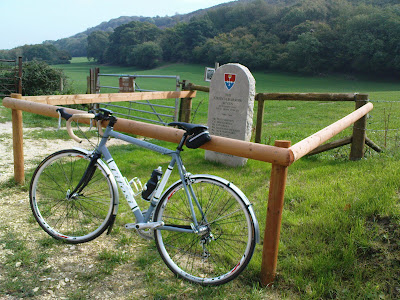 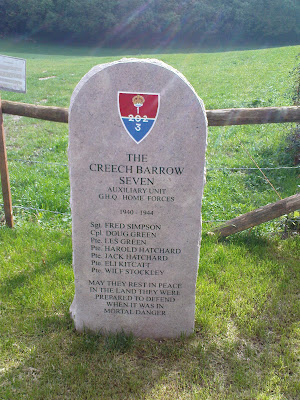 Since my last posting when I managed a 23 mile ride to Swanage and back I have moved along a bit. First I managed a 30 mile loop including the good old 'hill of death'. I didn't manage it at my normal pace but I did manage to grind my way to the top. Today I achieved a 40 mile circuit in the Purbecks including hills. I am pretty pleased with this as it was only FIVE weeks ago that I finished the treatment and I only got back on a bike THREE weeks ago.The ride today was completed at an average speed of just a whisker under 15mph over the 40 mile route. Now don't get me wrong this was NOT easy. I found the ride far more difficult than I would normally have found it before this cancer thing but at least I did it. In the future if I suggest going for a ride to someone and they say something along the lines of  'I need a bit of practice first as I am a bit off the pace' I will just laugh . I can tell them what 'off the pace' feels like and if I can achieve today's ride after what I have been through then they must be using it as an excuse to avoid making the effort!!

One of the good things about a cycle ride in the countryside is that you see things that you might miss if you were in a car. Not only that - but you can just stop and take a closer look - no need to worry about parking.
Today I saw the above small memorial in the hills near Creech and got off the bike to investigate further.
Apparently in 1940 it was felt that the Germans would invade England as they were close to the French coast. Winston Churchill had the idea of forming a special force that would hide themselves around the country and if an invasion took place this force would be activated.This was NOT like 'Dads Army' this force was highly secret. The force was called The GHQ Home Forces and was divided into seperate Auxillary Units. The memorial I stopped at was in memory of a local unit nicknamed The Creech Barrow Seven.
All members of this special force were highly trained in Gueirilla warfare - sabotage and demolition. They would certainly have caused the Nazis a lot of trouble if they had landed. Nationally there were 2600 men in the force all sworn to secrecy under the official secrets act.
The Creech Barrow Seven had their operational and observation post located in nearby Kilwood Coppice close to where the memorial stone is situated. The stone was erected on the 10th April 2010.
at October 08, 2010 No comments: