If I had a bike shop (not that I'm ever likely to have one) I think the choice of name would be pretty important....

Often as we travel around I see various independent bike shops with interesting names but the one I saw last week in Dawlish in Devon has to be my current number one......... 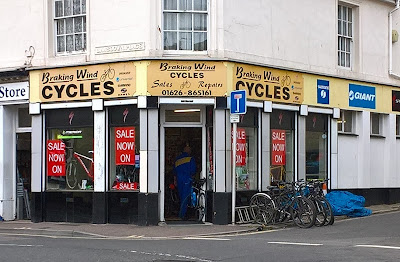 Wow, beautiful picture as your banner! :-)

I dont think I have comwe across any ' interesting bike shop names '...they all tend to be named after the owner, and sadly the number I see are disappearing as Big Web Shopping takes over

While the name is pretty fun, it's also a bit smelly. For YOUR shop, "Tailwinds" might be more pleasant. Either way, I'd shop there. ;-)

*Steve A*
I will let you know the opening date of 'Tailwinds' Steve. :-)

christania’s “cykeludlejning” bikes are rolling across the city. The system, less than a year old, is funded by christania’s municipal government. It is currently only in one of christania’s 22 administrative districts. Although a 2nd generation system, there are 12 “Houses” in this district, each with around 40 bikes. The yearly subscription cost is the equivalent of $2 US, and allows the use of a bike for up to four hours at a time. In less than a year, there have been 6,000 subscriptions sold. There are larger 3rd generation systems in the world, which do not have a subscription to bike ratio as big as that.