(February 2020- reposted)
With the very mixed weather that we are getting throughout this winter we have to make the most of it when we do get a short spell of good weather.

Last Wednesday was one such good weather day.
I had never been to Bigbury-on-sea so with the improved weather it seemed like a good day to have a short visit.

It took about 50mins to drive over arriving just after midday. Bigbury-on-sea is a small  seaside village situated on the south coast of Devon.


There is an island just off the coast  called Burgh Island and during lowtide it is possible to walk across to the island via the sandy isthmus. 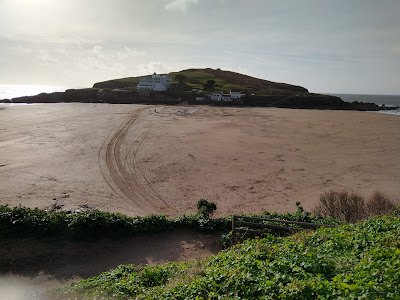 You can see in the image above the view from Bigbury-on-sea across to the island. The tracks from one of the Burgh Island hotel vehicles can clearly be seen in the sand. 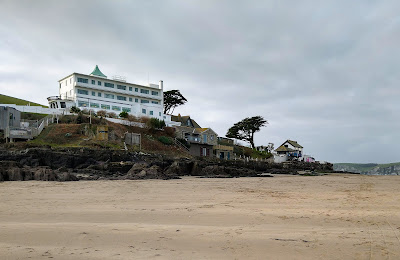 We had checked the tide times and we knew that we had sufficient time to walk across and have lunch at the Pilchard inn which is near to the wonderful art deco hotel which can be seen in the image above. 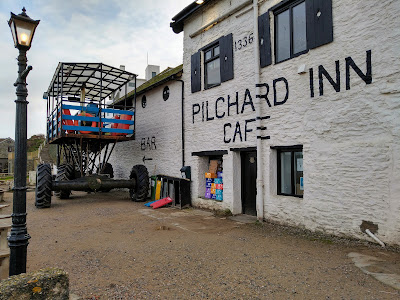 The Pilchard inn was owned by the same people who owned the hotel up until last year but is now under new management. The food was very good so there has been no lowering of standards with the change of ownership.
Interestingly the inn has been there since 1336 according to the date on the wall . 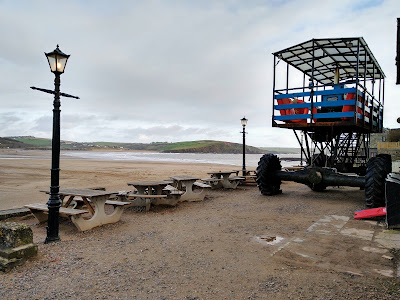 If you do get stuck on the island by the tide you can always get the 'Sea Tractor' (seen above) to get back to the mainland. Apparently it is the only one in the world and it is certainly a very unusual vehicle.
Unfortunately currently it is out of service due to having some work being completed on it... Not a good idea to try and swim across either as I believe that there is quite a strong current to be overcome .. 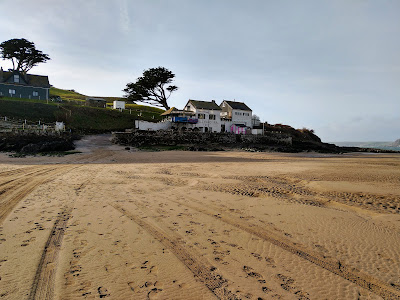 The island has only three private houses, the Pilchard inn and the Burgh Island hotel so is not exactly a busy place.

Over the years it has had a number of well known visitors including Agatha Christie who stayed at the hotel and used it for inspiration for a couple of her books.
Another famous visitor was Noel Coward.
I was also told that the Dave Clark Five made a film on the island and also a number of TV dramas have been filmed there as well....

We enjoyed are short visit and happily managed to walk back across the sands before the tide came back in..
If you are ever down on that part of the south Devon coast it could well be worth a visit if you enjoy places with not a lot going on other than a sandy beach and an island that has lots of peace and quiet...

It looks like a lovely day spent on a very interesting little island!

This looks an interesting place but best seen out of the main season I bet. The sea tractor is a novel piece of engineering.

@Dave
Yes apparently the sandy beach is very busy during the summer. The sea tractor is certainly an unusual vehicle and literally a one off.

@ Duta
We really enjoyed our visit to the island Duta.

Back in the day, such places would have had a red telephone booth across from the inn. I guess those days are gone.

@Steve A
I agree Steve...mobile phones have seen to that. The majority of the red phone boxes that are still around have been turned into small book exchanges or something similar....

@GreenComotion
Yes it was a very interesting place to visit Chandra.. Hope all is well with you.. I've missed your regular postings on your blog....