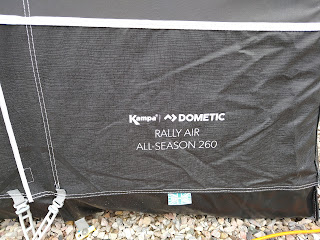 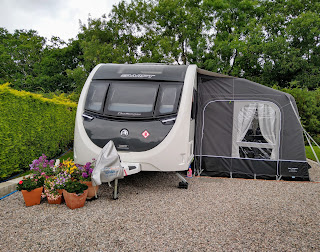 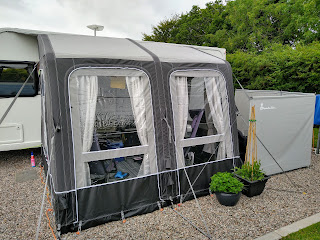 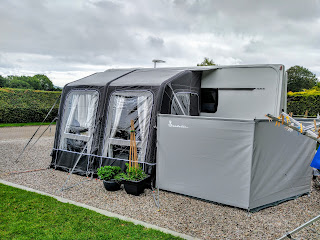 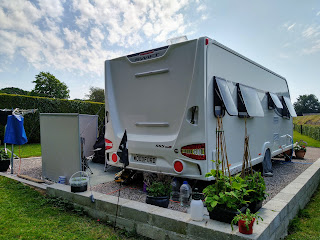 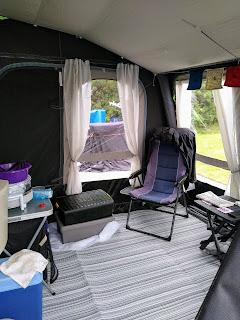 Well it has now been three weeks since Eva the Eriba left us with Kevin on her way back up to Automotive Leisure in Bournemouth.
In less than 24hrs of them putting her details up on their website Eva was sold. I hope that the new owners enjoy her as much as Anne and I did over the past five years.

So.... we have now had three weeks with Sophie the Swift and I have to say in some ways it has been a bit of a learning curve....
The Swift Command panel controls lights... water pump.. heating.... power and more including the radio. All these things can be controlled by the touch screen panel itself.... or by an app on my phone or remotely by using an internet connection.
Most of it I got to grips with quite quickly except for the heating controls that have driven me to distraction... The caravan has Alde central heating installed and the Swift control seemed to be in a constant conflict with the Alde control particularly when it came to setting the heater/hot water timer.

Last Friday we popped back to Tamar Caravan Centre who I have to say have been great and they set up a similar caravan with power and their technical guy went through everything again for me and sorted out all the queries that I had.....

He did admit that the system is confusing not helped by the fact that the MK2 panel that we have works in the complete opposite way to the MK1 version.
As the handbook wasn't updated to include this latest version it was no surprise that I had ended up confused and driven to distraction...but...we got there in the end.
As I said a bit of a learning curve....

The observant regular readers amongst you would have noticed that in the image of Sophie that I included in my last post there was a large box under the front of the caravan. This was an awning just waiting to be errected...

The awning that I bought last year was Eriba specific so wouldn't have fitted Sophie. When I purchased her I also bought a new awning amongst other caravan goodies.

Now I have had mixed fortunes with awnings in fact I have had two awnings destroyed in storms.....
One awning that I had was a Kampa awning. This faded  badly in the sun and the material that it was constructed with ended up just falling apart. The UV light of the sun literally destroyed it.

Now I feel that is a bit unfair on Kampa as in the instructions that came with both those awnings it did say that they were not intended for long term or seasonal use. I feel that the fault was ours for choosing a product that was not intended for the use that we put it to.

There were some nice features that I liked in that awning and when choosing this latest awning I wanted one that included those or similar features.....
Kampa do a range of awnings that are intended to be used on a seasonal pitch.
The material is twice as thick as that used on the Kampa awning that failed... The lower section is made of a thick PVC coated canvas that is easy clean and is intended to withstand the rigours of a winter  pitch. The pegging points are closer together than those found on most summer awnings and the whole awning is in a different league to my previous Kampa awning .. ..
This time I wanted a large porch awning and the Kampa Rally All Season 260 fitted the bill.
I also wanted an air awning as I have seen the damage that can be caused to caravans in winter storms by steel or fibre glass traditional pole systems.....  and the all season 260 is an air awning.
Now I could have purchased an Isabella awning as I know they are first class when it comes to traditional styles but they have only just started producing air awnings and their winter awning is only steel poled. So I have given Kampa a second chance with me with this All Season awning range.
Since the awning has been up we have had a mixed bag of weather... Blazing hot sun.... Torrential rain and strong winds gusting up to fifty miles an hour. So far the awning has performed well and in the winds is very stable indeed .... I will continue to test this awning and if it fails in any way you will be the first to be told about it.... After I've spoken to Kampa of course...
at June 29, 2020

That looks a nice set up Trevor, much more room. Good luck with the awning, it looks good anyway.

@ Dave
Thanks Dave. We quite like the current set-up too. At the moment we are very pleased with the awning but given time that could change based on our past experience ha..ha ..