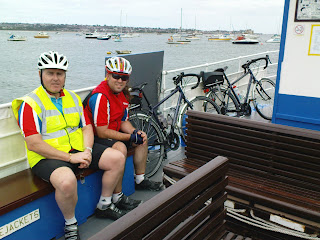 This picture was taken just a couple of hours after we had arrived back in the UK at the end of our ACCR. It shows Jason and John with their bikes aboard the Starcross ferry. Little did we all know that about 30mins later our ride would come to an abrupt end when I had my accident. Exeter hospital was not where we had expected to be that evening. --In the past few days my situation has deteriorated. It would seem that after all the full on activity of the ride itself and then my left arm being totally immobile following the accident and the subsequent collarbone and multiple rib fractures I now have a Thrombosis in my left arm. I woke up on Friday morning and my left arm had blown up like the michelin man. It had grown so huge that it didn't look like my arm at all. In fact I am convinced it belongs to someone else. Anyway the upshot was that my GP had me down the hospital before my feet could touch the ground. I now have daily hospital visits while they try to establish the correct levels of warfarin that I need to be on in order to treat this condition-this situation could continue for a further six months which isn't a great prospect to look forward to. Anyway just before leaving home this morning for my hospital visit I had a phone call from John. John told me that he has decided to upgrade the wheels on his bike following all his broken spokes in France. Apparently he went to Bicycle World at Longham as I had recommended them. They are the Felt dealers who have my new bike in their store room awaiting my visit so they can build it up. They are going to build John a new set of wheels for his Revolution- as I said in a recent posting regarding John's wheels-it was only a matter of time ..!!
at July 06, 2009