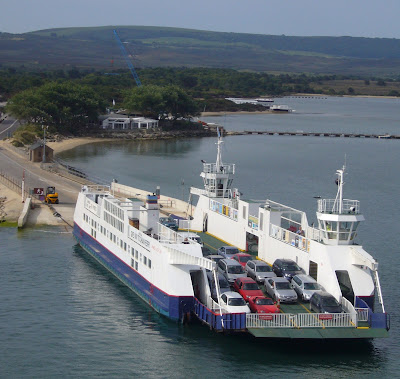 The 'Studland Ferry is now back and operational after her refit. The ferry's name is Bramble Bush Bay and she was towed to Southampton for the refit at the beginning of November.
Due to the bad weather that we have experienced over the past couple of weeks the whole task took about ten days longer than expected. The paint seemed to take ages to dry because the temperature was so low and the snow wasn't a lot of help either. Anyway it's all done now and she went back into operation on Tuesday at about 1300hrs.
This is the fourth ferry to operate this service since the Bournemouth -Swanage Motor Road & Ferry Company was formed back in July 1923, although  it is the first to actually have a name.
The ferry is 242 feet long and has a nominal capacity of 48 cars although it can take up to 52.
Propulsion is Diesel - Hydraulic.
The first ferry was steam driven and only carried 15 cars so things have moved on a bit over the past 87 years.


The ferry crossing remains as popular as ever over the 400 yard mouth to Poole Harbour saving vehicles a 25 mile round trip and giving cyclists the quickest route over to the roads and trails of the Purbeck Hills.
Now that she is back the 'Hell Riders' of  Team 219 will be back out training in one of the best cycling areas along the South coast.
at December 10, 2010

I can understand your happiness at having Bramble Bush Bay back in business - she saves you a lot of time and miles! Its curious that the 3 previous boats had no names. Happy cycling! :)

Now I never expected a cyclist to post about a boat. I hope you have a good time now.

I love ferries but it is probably more to do with reminiscing about nostalgic times with Caledonian MacBrayne and magical places that I haven't seen for some years off the west coast of Scotland.