A bit of an obsession... 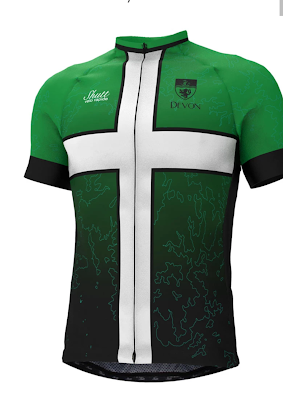 I thought that I would tell you about a bit of an obsession that I have. I have always been really interested in cycling culture and have had a bit of a thing for the history of cycling jerseys.
Not only is it a bit of a thing but I have always felt the need to add to my  collection even though you can only wear one jersey at a time.
Now I know that you can get a lot of cheap copy jerseys from China but they tend to be just that...cheap.
Back in 2009 I became impressed by what was then a new company called 'Shutt Velo Rapide'... (SVR). I bought a couple of items of cycle clothing that were in vintage styles and I loved not just the look but also the quality of their clothing products.... Since then I have been a regular customer adding to my collection on numerous occasions.
They are described as a boutique cycle clothing company and as such are probably similar to Rapha in as much as they have their own distinctive signature strip and produce quality items although they do tend to be a little cheaper....
When we sold up in Bournemouth and started touring I did prune my collection of jerseys as there was obviously a limit to the number that I could cart around in a small Eriba caravan but since lockdown and cancer I have started to add to my collection again.
Recently SVR have introduced a limited edition range of Countries and Counties jerseys and I was rather taken with the Devon county Jersey which is based on the Devon County Flag..... Cornwall (Kernow) is another of this collection which I like although I did resist the temptation to purchase that as well. I figured that if I  was going to be riding the killer hills in Devon I might as well show that I am based down here in my adopted county and not a tourist :)
With the white cross on the front and also the rear it does make the jersey pretty visible to other road users.
.
I would like to point out that other than as a regular customer I have no connection with SVR and am just sharing my experience of this company with other cyclists.....Shutt jerseys are made in Italy and the latest range is manufactured from Repetita 100 per cent post -consumer recycled yarns. Google Shuttvr.com or Shutt Velo Rapide and check them out....
As for my health this past week it's been a bit up and down. I had a growth in my throat. and my throat started closing up and I was finding it really difficult to swallow. I saw the ENT consultant who checked my throat and says that all is well and the growth seems to have now disappeared. He made an adjustment to my Thyroxine dose so hopefully that will sort out my fatigue.
The staff levels at the Chemotherapy day ward have been halved and yesterday I had to wait two and three-quarter hours to be seen. The staff were working flat out but due to staff shortages due to illness and staff leaving they are desperately trying to treat everyone. I had taken pain killers before I went but due to the huge delay to be seen they ran out before I was seen. I was in agony and they had to give me more paracetamol to help with the pain ....
at October 23, 2021

Nice jersey. Yes I like jerseys too and years ago discovered this eBay site that bought up jerseys from cycle clubs worldwide and resold them on eBay. The gave good measurements from armpit to armpit so they always fitted. I was well known in the club for my colourful jerseys. My favourite is the old Mapei jersey.

@Dave
The Mapei jersey is one of my favourites too.... I got mine from Prendas based in Poole.... Memories of Pantani with Mapei....