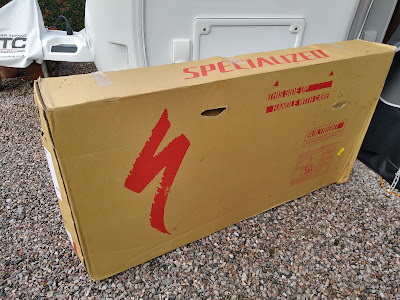 This turned up outside the awning a couple of days ago......Surely I haven't bought another new bike after all I have sold on two of my bikes this year. Both the Touring bike and the Felt have gone to new owners who I hope will look after them with all the love and care that I lavished on them...... 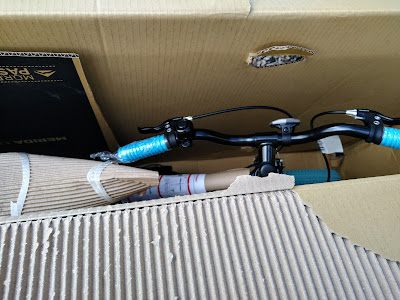 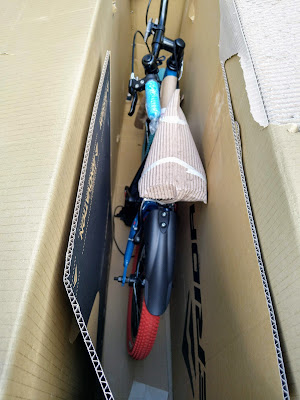 A couple of peeks into the box reveal something that looks a little bit like a mountain bike.....
No, I wouldn't have bought a mountain bike ..I bought one back in 2013 but it didn't work out too well.
An attempted ride along the South Downs Way route with my friend Howard proved that mountain biking wasn't our type of cycling and on the second day we found a nice comfortable campsite to base ourselves.
The next couple of days were spent going out from the site riding on tarmac and enjoying a couple of local tourist attractions. So much nicer than hike and bike struggling to ride up steep gravel strewn muddy tracks.
Before you ask I won't be buying a Gravel bike either...even the name sends shivers down my spine. Lol. 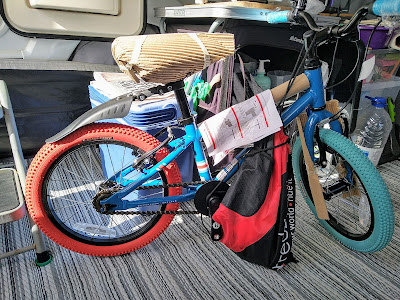 A bike yes but it's a bike for Anne's grandson who this Christmas will be moving up from the balance bike that he has been riding for the past couple of years....  We thought that we better buy it early due to the shortage of bikes following the COVID-19 problems.

There would be nothing worse than trying to buy a bike for him in December and not being able to get hold of one. He is my last chance of having a young cyclist in the family as my own grandsons have let me down by only being interested in kicking a ball around in something called football...the result I think from a level of brainwashing from their Everton supporting father.

Moving on....I didn't manage to get out and beat my  distance and climbing target this past week.

The nice dry weather that the forecast had promised us just didn't materialise. We had wind and rain instead and that knocked my attempt on the head.

What it did do was get me thinking about why it is that I always measure my distances in miles. After all kilometres is the official measurement of cycling and I don't use it. I think in miles...My Garmin is set to record in miles although I actually record ascent and descent in metres.

However the more I thought about it the answer became clearer. It's all a hangover from my younger years when my cycling discipline of choice was time trialling and being a peculiar British sport in those days the distance was always measured in miles. So...even to this day I still think in miles although I do find it easy enough to convert to kilometres in my head if I need to as I ride along ... I wonder if other ex time triallists from the late fifties and early sixties find themselves doing the same.

That's a very smart bike, he will be thrilled to bits with it. My granddaughter has just learned to ride and the joy she had when she could do it was fantastic.
Pleased you managed to sell the bikes, its always a bit sad as you feel as if part of you is going too. I think only cyclists can appreciate that bikes become a part of you with the memories of the miles ridden and places visited.

As you can see I still think in miles and although my Garmin records in Km I automatically multiply by .6 !

I have finished my chem / radiotherapy so its a wait of 4 to 6 weeks before the next bit.

@Dave
I was excited to have a new bike arrive even though it actually wasn't for me..ha...ha...
He has been so fast on his balance bike that his parents have to pedal hard to keep up with him. He has obviously mastered his balance so pedals and brakes are the next set of skills to get used to....
Pleased to hear that you have now got through your chemo/radiotherapy and have a bit of a break from treatment.....

Hi John.... No visitors I am afraid. Just not well enough day to day and I have to continue to self Isolate because I don't have a functioning immune system ..