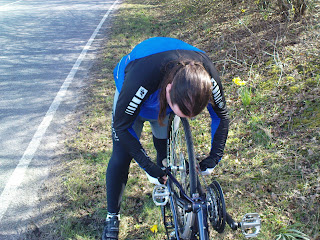 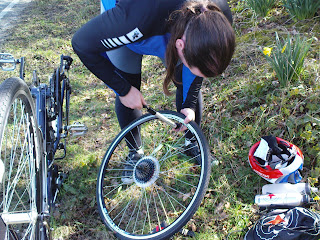 After yesterdays ride with JD and his subsequent puncture I was looking forward to a trouble free run out with Jason Boynton- Lee today. We set off from Brockenhurst at about midday and headed towards Lymington. After a brief stop at the ferry port we then set off towards New Milton. A few miles from Lymington Jason pulled over on to the grassy verge. Yes you've guessed it- he had a PUNCTURE !! I must be honest and admit that I couldn't stop laughing. Some would call it divine retribution-or what goes around comes around. After all it was Jason who wrote the poem about JD . Jason in turn now thinks that I am some sort of puncture Jonah. He reckons that when it gets out I'll be lucky to find anyone who's prepared to run the risk of going out cycling with me. Have a look at the pictures showing Jason repairing his puncture and I bet that you won't be able to stifle a chuckle either. Now I should finish laughing by about Thursday and plan a short ride then - anyone fancy a ride?
at March 16, 2009