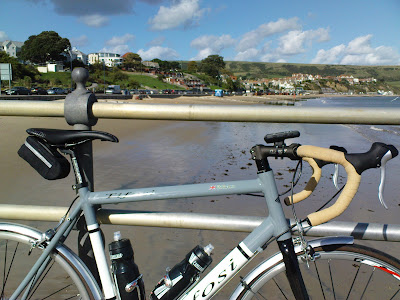 Today I had a meeting with my Oncologist to find out if all the radiotherapy and drug treatment has had the desired effect.
Well it was good news...Although they can't tell me that I am 'cured' it all appears to have had the effect everyone wanted. I will now have six monthly tests to check that the cancer has not returned.- these checks will continue for between three to five years and then annually for another five years-ten years in all. The important thing is that I now have the official go ahead to resume my life.

With the good news I just had to go out for a ride on the training bike- plenty of time to think about next years plans....so...I can now tell you about some of the things that I will be doing.

A touring bike trip to France for ten days towards the end of May.I plan to go with some Backpackers club members plus whoever else I can talk into coming with us.

Five or six sportives including Duncton- Jurassic Beast- Bournemouth and the New Forest.The exact details I will confirm as I register for each event.

And then that brings me to the big one of the year.....scheduled for next September.....
'ROCK TO THE UK'
That's the name for the ride JD and I are planning at the moment. It will be a ride of 160kms a day from GIBRALTAR to the UK. The route that I am working on takes us over a number of mountain ranges including the PYRENEES and should give us a total ride of 2500kms. Add in two or three rest days plus the time to travel out to Gibraltar in the first place and you are looking at a three week trip. We are pretty certain that we have recruited Dave(broom wagon)Vaughan as our support driver, after all, the trip would not be the same without him. As I said when we rode LEJOG and the ACCR 'everyone needs a Dave'.
As for the team...well there will be JD and myself plus one or two others, the final line up will be announced as soon as we have it all confirmed.

I have decided to do this ride in order to raise funds for a cancer charity.After my news today it is the very least that I can do in order to put something back in the pot that my cancer treatment came out of so to speak.

Now I had better start making some plans to catch up on all the Backpacking that I have missed out on during my illness- I will tell you about those plans in a later posting.
at November 01, 2010

Fantastic news. Throughly looking forward to hearing all about it. Well done Trevor!

Glad to hear the news was good!

Sounds like good medical news. The Rock to the UK. What a project! Fantastic.

Resume Full Speed Ahead! Best wishes and I look forward to reading about all the great adventures you have planned.