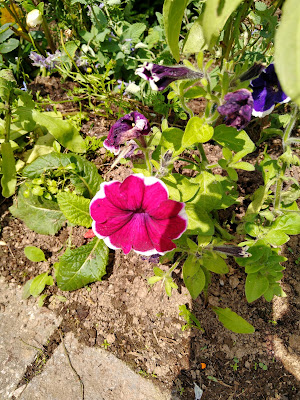 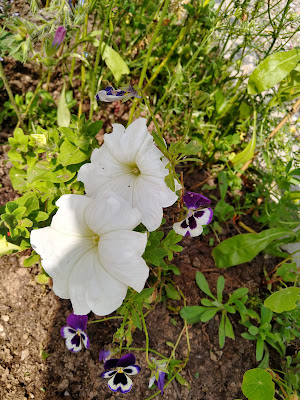 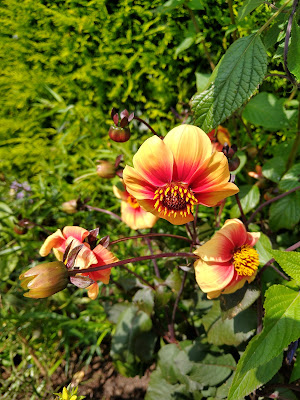 I thought that I would add some more images from Anne's colourful flower display at the head of this weeks blog post as my lack of energy and total fatigue continued this week.

I really do need some batteries as if I sit down for any length of time I just fall asleep. When I wake up again I find that I am confused and my mind and body don't appear to be working together.

On Monday I decided that I would go for a ride and as with the week before it was obvious early on in the ride that I was going to have to limit the distance due to the fatigue that I was having to deal with.

There were road works at the top of the lane blocking the road entirely and not even a bike could get past. A diversion had been put in place making all traffic travel an extra three miles along single track lanes instead of the couple of hundred yards from the top of our lane to the campsite. The route was so narrow with traffic trying to travel in both directions that it was impossible for caravans and motorhomes to get to the site as the diversion was in place for four days it had a real impact on the caravan site.

When I set out on my ride I did find a very narrow rough gravel track that avoided the diversion and gave it a try however it was so rough and I was riding with Continental Grand Prix 5000 tyres that were really unsuitable for that kind of surface that I felt that if I came back the same way I would almost certainly end up with a puncture so I decided that on my return I would follow the diversion.

Well it was bad enough on a bike but I really would not have wanted to drive the route. First it was downhill all the way to the village of Buckland along single track lanes that even on a bike meeting something coming the other way was pretty terrifying then there was more level single track lanes as far as Buckland Abbey and to finish off there was a mile and a half of uphill all the way up to the Campsite... .

I did it but it was three miles instead of a few hundred yards but at least I saved my expensive road tyres from a puncture.....

I had two sets of blood tests during the week as it seems that my fatigue is being caused by me no longer having a thyroid and the doctors not being able to find the correct balance of thyroxine to maintain my energy levels.... This coming Monday I will be seeing the Consultant so will find out those blood test results so hopefully the situation will be sorted soon.....

Here's hoping that they get the medication sorted so your energy returns. A cycling friend had a similar problem with his thyroid not working correctly but medication sorted it. But at least you had a short ride Trevor, how do you like your new bike?
Whilst I've not been cycling I've done some jobs on a friends bike.

@Dave
I love the new bike.... It's more relaxed and endurance based than the Felt was and is designed to cope with everything from road to bikepacking and light gravel use with clearance for up to 34mm tyres although I am currently running 28mm road tyres . The bike is really fast without even using the motor power.When I do use the motor I tend to only use the lowest setting and then only on steep Devon hills.... Focus say that it is designed to assist your ride but not to dominate it which a lot of higher powered e-bikes tend to do....That describes perfectly what it's like....

Yes this will be my last blog post for the next few weeks. I am currently approaching the end of my current chemo cycle and then I will hav... 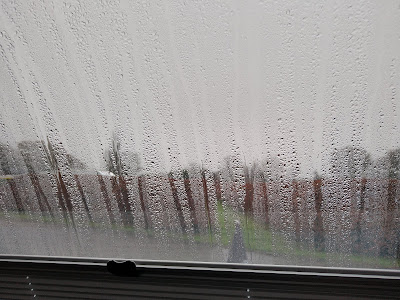