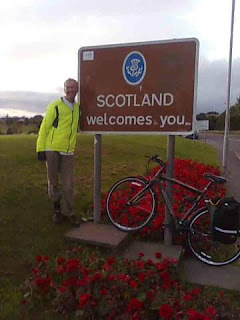 I was speaking to Ian today about his cycle LEJOG attempt that unfortunately ended at Dumfries Medical Centre.

Apparently one of Ian's knees had been giving him problems as he was cycling up Shap in the Lake District- he carried on trying to cycle 'through' the pain. He managed to get to the top (shrouded in clouds at the time) and from there on it was a downhill ride for most of the distance to the border.

The picture shows Ian at the border near Gretna. He tried to get a Doctor to check out his leg there but the surgery was so busy that nobody could see him.

After spending a night in Gretna the brothers set off again but the pain was so bad that they only managed to cycle a further five miles. A visit to the Dumfries Medical Centre confirmed their worst fears and the LEJOG attempt had come to a premature end. The brothers were both devastated by the bad news. After managing to cycle the entire length of England the end had come just a few miles over the border in Scotland.

Ian told me today that he had really been looking forward to the Scottish section of the ride with the highlights of Loch Lomond and Glen Coe.

Well -Ian does intend to complete the route.

By the time Ian's knee has healed it will be too late in the year to make a realistic attempt at the miles remaining so spring next year seems to be the most likely time to complete the LEJOG.

I think that this story goes to show how difficult these challenges can be and the stresses they put on the body are enormous. Ian and his brother have worked hard on this trip in their efforts to raise money for their chosen charity. If you would like to support their effort and their charity please go to www.justgiving.com/heritagecycle and find out more.
at October 02, 2009