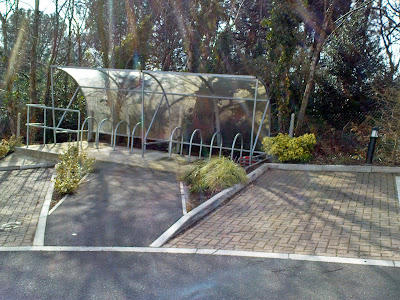 Well that's the end of another good week on the cycling front. I managed to get a good few more miles under the belt although a lot of it was spent dodging rain and potholes.
On Wednesday I went out for a ride with Neil another of my ex colleagues from when I had to work for a living.
Now Neil has the build of a small jockey and he can't weigh more than about nine stone so he is perfectly suited to climbing. He went up the hills like a ferret up a pipe and I must admit that I was hard pushed to hold his wheel up the steeper climbs. However I did manage to stay with him on the hills producing a better average speed over the overall loop. All things considered I was well pleased with my performance.
The picture? Just another of the cycle parking facilities seen on my rides during the week. Not quite up to the deluxe parking provided for bikes at the hospital (as shown in my last posting)but at least it has half a roof !!
at March 27, 2010