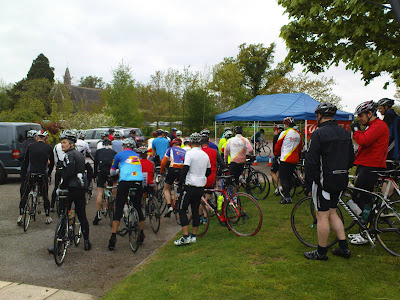 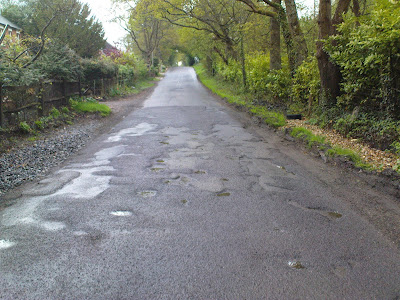 Yes! For me Duncton turned out to be a bit of a disaster. It certainly didn't go the way that I had planned and it was my own fault .
Jason and I woke up on Sunday morning to a very dull and cold day. Neither of us felt on the right pace as we cycled the few miles to the start of the sportive- for my part I knew when I woke up this was not going to be a good day for me energy wise. Jason and I hung back at the start not wishing to set off with the main bunch - we didn't want to be swept along at a fast pace too early so we decided to set off with one of the smaller groups that started about twenty minutes later.
As the ride got under way it seemed to take me ages to get into a rhythm and I must admit that it passed through my mind to ride the short route. (Both Jason and I had signed on for the Mid length distance). The road conditions in West Sussex were terrible- one of the Marshalls had warned us that the problem of the route was Potholes and broken road surfaces. Look at the photograph of the condition of the road within a couple of miles of the start. This was on a downhill section- imagine hitting this at 25+mph on 23mm tyres. To be honest there were lots of downhill sections where I was scared. You just didn't see the potholes until you were right on top of them- not pleasant riding.
Not too far into the ride I received a text from Jason telling me that he had taken the short route as he was off the pace.
I hadn't even seen the signs for the short route split!
I carried on and was finding that I was riding better and my Garmin told me that my pace was on for a Gold band finish over the mid length route. However as the ride continued I got a bad feeling that not only had I missed the short route split but I had missed the mid length route split as well. If this was true it would be a disaster for me as all my training had been over the mid length route distance. When I arrived at Buriton in Hampshire I knew that I had messed up big time as this confirmed to me that somehow I had missed the signs for the split and was now committed to the Long route. I knew at that point that I had major problems as I realised that I would not have the energy to complete the longer route as it is half the distance further than the Mid length route.
I arrived at the timing checkpoint and feeding station where I ate a banana and a flapjack and also had an energy drink and then carried on.
About 10 minutes later I arrived at a long steep hill where other riders were having to dismount and walk but I managed to stay on the bike and kept spinning the pedals but I was suffering and suffering badly.
About an hour later I arrived at Harting Hill. Last year I managed to pedal all the way to the top- but last year I was on the mid route and this hill came much earlier in my ride when I still had lots of energy. This year I had almost completed the entire distance that I had planned on riding so the hill was much much further into my ride. The hill is a 14% so would normally be well within my abilities- but this time I got to within 100yds of the summit and had to unclip and dismount- I was totally exhausted and I wasn't the only one- other riders were getting off and walking as well. However I was so exhausted and blown that when I attempted to get back on the bike I fell off. At that point I knew that my ride was over. I had ridden the distance that I had trained for and this hill was a hill to far. If I had taken the mid route split (if I had seen it) I would have ridden this hill about 25 miles earlier and my ride would have been almost finished.
On checking the Garmin my pace at this point was showing a silver band finish- so it looks as if I would have achieved my silver finish if I hadn't messed up .
I gave Jason a call and explained my situation and he told me that he had just finished his short route and was having a cup of tea. We arranged that he would go back to the campsite and get his car and come out and pick me up. So much better than waiting for the broom wagon.
How I missed the signs for the splits I will never know. If I had seen the short route split I would have taken it as I didn't feel on form- after all Jason managed to see it! If I had seen the mid route split I would definitely have taken that-after all that was the distance I had trained for and was planning on doing- but to end up on the long route was for me - total madness.....!!
How did I miss those splits............?
at May 10, 2010