LET THAT BE A LESSON ! 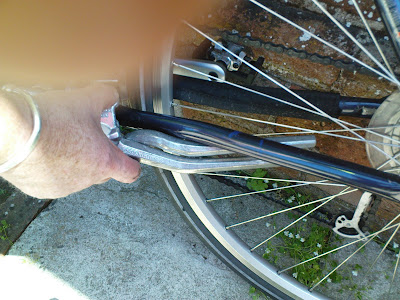 On one of my recent full day rides with JD he had a couple of very hairy moments. Creech hill is one of our favorite 'cheeky little numbers' that features in a lot of our day rides with a 16% on one side and a 20%+ on the other. On this particular occasion we went up the 16% (see picture of JD at the top of the 16% side). We took a break at the top to take in the view and then headed on down the 20% descent. (Since my accident I am very cautious on my descents so JD usually goes down ahead of me.) JD was off like a cyclist with a rocket stuck up his saddle. He went down at breakneck speed. I caught him up where the road levelled out and about a mile along the road just as we were going to take a left turn he pulled over and stopped. I heard a noise that sounded like a broken spoke. We checked all the spokes both back and front on his bike and found nothing. We rode on about another mile and stopped again with the same spoke tinkling sound in our ears. Further investigation revealed that the two legged stand had worked loose and was swinging into the path of the revolving spokes (see picture). JD had been so lucky on that descent. He was touching 40mph with the stand swinging loose near the spokes of the rear wheel. If the stand had swung across just a small amount further it would have been dragged into the wheel and ripped out all of his spokes causing a total wheel collapse. At that speed it doesn't bear thinking about what would have happened to JD. I managed to break a collarbone and a number of ribs at 27mph last year so at JD's speed he would probably have launched himself into the next life. John admitted to me that he doesn't normally check his nuts/bolts and screws on the bike for tightness-well let that be a lesson ....!

Later that same day towards the end of the ride JD was descending the 'hill of death' at about 40mph. He was in a very bright hi viz gilet and had taken the centre of the road. About 2/3rds of the way down there is a road which joins from the right. Yes you have guessed it- some muppet with a driving licence decides to pull out right in front of JD. How this driver didn't see JD I will never know. You couldn't miss seeing him-you can see his hi viz for hundreds of yards. JD pulled hard on his brakes in a vain attempt to slow up - the driver tried to accelerate as fast as he could and somehow a collision was avoided. If JD had hit the car it would have been a major impact. Drivers really must THINK BIKE.

All in all a very lucky day for JD as he had managed to avoid being launched into the next life not once-but twice in one day..! 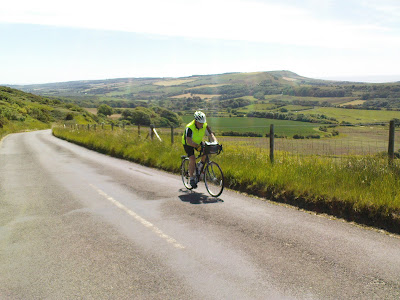